These geometric installations that grace the mall’s escalators are by New York based artist Aakash Nihalani (b. 1986), one of the most exciting street artists in the world today. In this work, Nihalani uses everyday materials such as carpenter’s tape and vinyl to create isometric squares that create optical illusions of depth on flat surfaces.

Nihalani thinks that “people need to understand that how it is isn’t how it has to be,” and that how we see and experience the world is based on our frames of perception, which we can easily adapt. Nihalani’s brightly colored works remind viewers to look and think differently, and find potential in even the most mundane materials. While his op-art inspired installations were originally done on the streets of Brooklyn, they can now be found as impressive commissions for some of the world’s most important brands and corporations including Facebook, AOL, and Lacoste.

Aakash Nihalani is represented by Seven Art Ltd. in New Delhi and this work is courtesy of ArtC 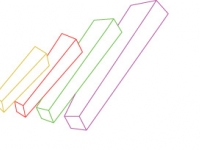