This work, “Apocalyptron,” is a large-scale sculpture created by the Delhi-based artist duo Thukral & Tagra (b. 1976 and 1979, known as T&T) that hovers on the cusp between parody and madness. During its appearance in Chennai, “Apocalyptron” takes on the avatar of “Chitti,” in honor of the famous character in an iconic South Indian film. Chitti imagines a world where consumerism has gone berserk. Standing a formidable 4.2 meters high, this sculpture is created entirely from cast-resin bottles of various types of products commonly found in supermarkets around the world, creating a form modeled after the popular Japanese Transformer figures from the “Gunam” series. Each of these bottles is labeled with the artists’ tongue-in-cheek branding of “Bose-dk,” and this brand has been featured extensively in T&T’s paintings, installations and graphic works.

According the artists, their works comment on the globalization of consumer culture, and the consequences this brings for India today. While both playful and humorous, T&T’s works express thoughtful questions about the nature of Indian identity from both an Indian and a foreign standpoint as to what it means to be Indian. 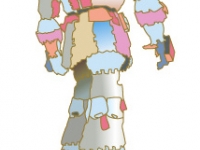 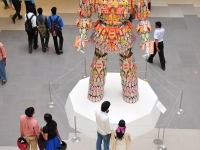 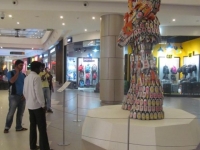