This glowing and writhing bedbug, Khatmal, is the work of Delhi based artist Vishal Dar (b. 1976). Khatmal is part of a series from 2009 where Dar created pulsing insect sculptures made from stolen car lights that were sourced from the old Delhi grey market.  The ‘alive-ness’ of this creature points in the direction of the cyclical order in which material is consumed, discarded and then reused/resold in a Bazaar, and the Mall is this creature’s temporary nesting place. One can also see faint connections to Japanese Anime, specifically the work of the master Tezuka Osamu.

Dar’s works reach ambitious technical heights with the help of his early background in architecture. Dar uses satire and scale to address deeper personal, political and sociological issues, and his practice often extends outside the gallery and into the public realm. Dar’s art practice is diverse in terms of medium, and transformation, with hidden code within iconic imagery. Through mythmaking, Dar instills a sense of the surreal in his works while still allowing them to address contemporary issues.

This work is courtesy of ArtC. 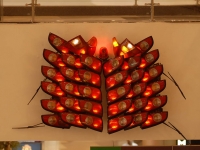